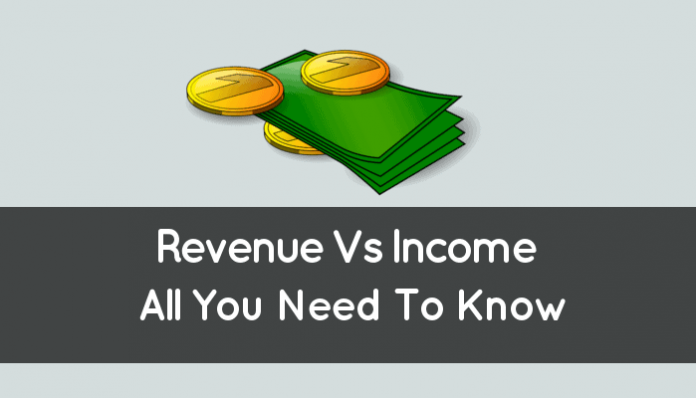 Looking for the difference between Revenue Vs Income?

Do they really have a different meaning?

What should you know?

In this article, we will break down the difference between Revenue Vs Income so you know all there is to know about it!

Keep reading as we have gathered exactly the information that you need!

Let’s dig into our financial terminology and knowledge!

Have you wondered what is the difference between revenue and income?

Revenue is a financial term referring to the total sales generated by a company.

Typically, the revenues refer to a company’s gross sales or its earnings before deduction of its cost of goods sold, taxes, depreciation, or other deductions.

On the other hand, income refers to a company’s profits.

As such, income is a term used to refer to how much a company was able to generate in profits after the business expenses and other deductions were made from its revenues.

The trend of revenue and income fluctuations over time can also provide a sense of where the company was and where it is heading.

According to Investopedia, revenue is defined as follows:

Revenue is the total amount of income generated by the sale of goods or services related to the company’s primary operations.

As you can see from this definition, we can qualify revenue in the following manner:

According to The Corporate Finance Institute, income is defined as follows:

Income can sometimes be used to mean revenue, or it can also be used to refer to net income, which is revenue less operating expenses (the “bottom line”).

Based on this definition, we can qualify income in the following manner:

Income can also be referred to as “net income” or “net profit”.

As such, net revenues provide a better understanding of how much revenue a company can generate if we factor out its cost of goods sold.

Net income refers to a company’s total profits generated from its business operations.

The net income refers to the money left to a company once it has paid for the costs of goods sold and its cost of doing business.

As you can see, the net income, or company profit, is what’s left from the company’s revenues once all costs and expenses have been accounted for.

Gross revenue, or gross sales, refers to the total amount of earnings a company generated from its business operations without consideration of its expenditures.

In essence, by looking at the gross revenues, we are interested to determine how much the company generated in total sales revenues regardless of its expenditures.

In other words, a company’s gross income figure gives us an appreciation of how much a company was able to generate in revenues, after deducting the costs of producing its goods, to see what’s left to fund the company’s cost of doing business.

What is the difference between revenue and income?

It’s quite common for many to use the terms “income” and “revenue” interchangeably as they both represent cash flow to the company.

However, from a financial point of view, the terms income and revenue have a different meanings.

In other words, revenues only show sales without consideration of costs and expenditures whereas income shows net profit once a company has made an accounting deduction of its cost of goods sold, business expenses, depreciation, interest, taxes, and other expenses.

Let’s look at a summary of our findings.

If you enjoyed this article on Revenue Vs Income, we recommend you look into the following terms and concepts. Enjoy!

You May Also Like Related to Difference Between Income And Revenue

Related to Types of Income or Revenue

Dividend Income (What It Is And How It Works: All You Need To Know)

Dividend Income (What It Is And How It Works: All You Need To Know)
Read more

Investing For Dummies PDF (All You Need To Know)

Investing For Dummies PDF (All You Need To Know)
Read more

Realized Income (What It Means And How It Works: Overview)

Realized Income (What It Means And How It Works: Overview)
Read more
Load more

ABOUT US
Passive-Income's mission is to provide you with guides, tips, resources and content to help you develop a steady and sustainable passive income.
© 2020 - Passive-Income.Zone