Rich Vs Wealthy (Key Differences You Must Know) 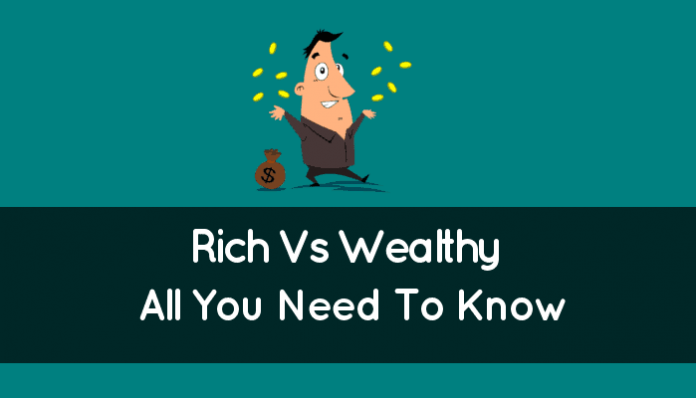 Looking for Rich Vs Wealthy?

What’s the difference between rich and wealthy?

What are the essential elements you should know!

In this article, we will break down the notion of Rich Vs Wealthy so you know all there is to know about it!

Keep reading as we have gathered exactly the information that you need!

Let’s look into the meaning of rich and wealth!

What Is The Difference Between Rich Vs Wealthy

You are on this blog post as you are looking to understand what is the difference between being rich versus being wealthy.

Although both these terms have something in common they are distinctly different.

What does it really mean to be rich?

What makes a person wealthy?

I will break down the notion of “being rich” and “being wealth” so you can see the difference.

According to the Merriam-Webster dictionary, rich is defined as follows:

The pure definition of “rich” is to have an abundance of “possessions” or “material wealth”.

In other words, being rich is to have a lot of money.

As you can see, being wealthy is not defined as having the abundance of possession of material, it is to be affluent.

Affluent in return is defined as “flowing of abundance”.

This is crucial to the understanding between wealth vs rich.

Now that we’ve looked at the definition of rich and wealthy, let’s assess their differences.

To be rich is to have a lot of money.

Rich people can get a lot of money by having a high income, getting an inheritance, or winning a lottery.

However, being rich does not necessarily mean financial freedom.

You can be rich (have a lot of money) but also be highly indebted.

In other words, you are constantly stressed out as you need to keep having the money come in to pay your bills.

For example, you can have someone who has $1,000,000 but chooses to spend that money on expensive cars, expensive jewelry, vacations, and so on.

If the $1,000,000 runs out, he or she will need to find money to be able to pay for the expensive goods purchased.

On the other hand, being wealthy means that you have acquired assets providing you with the “flow” of abundance.

To be wealthy means that you have the time to do what you love, spend time with your family and friends, learn new things, and live without the stress of having to pay your bills.

Being wealthy means that you are not living paycheck to paycheck or having so much debt that you must use all your money to pay for them.

Wealthy people invest in assets that generate a flow of income allowing them to live life on their own terms.

Key Differences Between Being Rich And Being Wealthy

To better illustrate the difference between rich and wealthy, let’s look at the key differences in a snapshot:

Here are the characteristics of the rich person:

As you can see, a rich person has the ability to pay for a lot of material goods but in the end, the person is not building a nest egg.

The rich person is typically more driven by spending money lavishly, gets satisfaction by showing off or impressing others, and does not think about the future consequences of spending so much money.

Here are the characteristics of a wealthy person:

As you can see, a wealthy person is a person who is conscious about his or her spending, invests money in assets that will produce value over time, and does not live to impress others.

Generally, wealthy individuals are able to afford many things but do not get pleasure from spending their hard-earned money for short-term happiness.

Rather, wealthy people deliberately choose to spend less on superfluous goods but rather focus on how to live a sustainable lifestyle, ensure they can live without worrying about money, or saving for future consumption.

Let’s look at a hypothetical example to understand the difference between a person being rich and another being wealthy.

To pay his bills, John must use all of his earnings and also dip into his line of credit to pay for the shortfall.

In this example, we can clearly say that John is rich (as he has a lot of money coming in from his employment).

However, John is not wealthy as his money is not invested in assets that will produce him value over time, and at the end of the year, he is in the red by $250,000.

John is on his way to a financial disaster.

Mary is an average employee in a company earning $50,000 per year.

However, Mary is a conscious spender and is focused on becoming financially free one day.

Mary has purchased an affordable home of $200,000, takes public transportation to go to work, and has decided not to take a vacation in the past years and save the money instead.

Mary is able to save $10,000 of her income by living a nice but frugal lifestyle.

With the money Mary has saved over the past years, she has invested her money and is building ever-growing net worth (or equity) and passive income source.

Mary has calculated that by continuing the way she is doing now, by the age of 55 she is able to retire and have enough money for a nice and comfortable retirement.

There are many celebrities that we can consider either rich or wealthy.

We tend to assume that celebrities earn a lot of money and so they have wealth and riches.

That actually is far from the case.

Granted, many celebrities generated a lot of money but not all of them had wealth.

For example, Michael Jackson is a great example of a celebrity that make millions of dollars (was rich) but was heavily indebted (was not wealthy).

Even though he had so much money that we can only dream of, he had over $400 million in debt.

Another example is Mike Tyson.

Mike Tyson amassed hundreds of millions of dollars over the course of his boxing career and has lost nearly all of it.

He bought expensive homes, expensive cars, spent lavishly, went through a costly divorce and so on.

Wealthy Celebrities With High Net Worth

Building wealth is about building positive net worth.

There are many celebrities that are notorious for generating millions (and some billions) but living a frugal lifestyle.

The most notable of a wealthy celebrity is Warren Buffett.

Warren Buffett is the owner of Berkshire Hathaway and has been considered one of the richest people in the world by Forbes for decades.

Warrant Buffett does not spend money on luxury goods, jewelry, cars, expensive things (except for his personal jet).

In fact, he still lives in the same house he lived in back in 1958.

He is wealthy as he has a lot of assets that have been appreciating over time, provide him with passive income, and he actively works to invest his money to build more assets.

Another wealthy person is Jeff Bezos.

Jeff Bezos is the founder of Amazon.

He is not the type of person that spends a lot of money frivolously.

He has been able to take his company from nothing to one of the biggest and most successful companies in the world by properly investing his money.

On a personal level, Jeff Bezos does not live to impress others, does not care to flash his money, or show others how much he made.

What’s important for him is to build long-lasting assets.

How To Become Wealthy

Now that you know what it means to be rich or wealthy, the next question you may have is how can you become wealthy?

Although there are many ways that you can build wealth for yourself, I will provide you with a list of what tends to produce the best result for many:

To become wealthy, you don’t necessarily need to have as much money as the rich.

Becoming wealthy is to change your spending habits, focusing on how to invest in assets that will generate an income or appreciate value, and caring less about what others think about how you live.

In essence, becoming wealthy is to adopt a wealthy mindset.

So, what is the difference between rich and wealthy?

What does it mean to be rich or wealthy?

In a nutshell, to be rich is to have piles of money whereas to be wealthy you have net worth.

The difference here is crucial.

Rich people have money and spend too much of it without thinking of their long-term financial needs (they would even borrow money to spend excessively).

Wealthy people take whatever money they earn (could be more or less than a rich person), spend on what’s important, and saves (and invests) the difference.

Rich people may appear to be wealthy but have little net worth whereas wealthy people may not appear rich but have a high net worth.

If you are looking to build wealth for yourself and eventually live financially free, be sure to read my guides, articles, and actionable tips on things you can do to achieve financial freedom.

On this blog, I focus on generating passive income in order to build wealth over time.

Generating passive income is one of my favorite ways to build wealth and generate a steady stream of income without having to spend a significant amount of time.

I’m not saying that I can make you rich and wealthy without you putting the hard work and effort into it.

Also, if you’re interested in getting more posts from me sent to you, subscribe to my blog.

Now, let’s look at a summary of our findings.

Difference Between Rich And Wealthy

If you enjoyed this article on Rich Vs Wealthy, we recommend you look at our blog to learn about ways you can make money and achieve financial freedom. Enjoy!

You May Also Like Related to Difference Between Wealthy And Rich

Share
Facebook
Twitter
Linkedin
Email
Previous articleEconomic Profit (What It Means, How To Calculate It, And Why: Overview)
Next articleEvergreen Passive Income (What It Is And How To Make It)

Investing Activities (Definition: What It Is And What You Must Know)

Investing Activities (Definition: What It Is And What You Must Know)
Read more

What Is Dividend Yield (All You Need To Know)

What Is Dividend Yield (All You Need To Know)
Read more

Economic Profit (What It Means, How To Calculate It, And Why: Overview)

Economic Profit (What It Means, How To Calculate It, And Why: Overview)
Read more
Load more

ABOUT US
Passive-Income's mission is to provide you with guides, tips, resources and content to help you develop a steady and sustainable passive income.
© 2020 - Passive-Income.Zone